Compared to generations past, children today play less in general and less outdoors. What does this mean for traditionally-designed playgrounds, spaces specifically set aside for an activity that happens less frequently? How can we reimagine who playgrounds are for? To what extent will digital technologies redefine our understanding of what a ‘playground’ is? In this and future posts, UNStudio’s strategic R&D unit UNSKnowledge is exploring alternatives for these public spaces through ‘bottom-up’ design methods.

UNSKnowledge hosted a workshop on the Future of Playgrounds at the CLICKNL DRIVE Festival held during Dutch Design Week in October 2018.

The aim of this workshop was to inspire participants to disrupt the outmoded design concept of the playground. These are traditionally places where parents bring their children to play with other children whilst looking on. UNSKnowledge invited participants to expand on the types of people and interactions that playgrounds can bring together and foster. Our moderator guided the participants to create experiential models of socializing, learning and undertaking physical exercise for multiple generations. During the workshop, participants created ideas by using interactive design tools developed by UNSKnowledge.

We believe the playgrounds of the future will be sites of social cohesion. To bridge the gap between the relatively few and small ‘sites’ that comprise playgrounds and the big task of bringing about social cohesion, we drew inspiration from Angela Glover Blackwell’s ‘curb cut effect’. This proposes that implementing small changes for a vulnerable group has the potential to positively affect everyone.

In groups of four, we asked each of our participants to randomly select a ‘role’ from the choices of child, teenager, parent, adult, elderly person and person with a disability. From the perspective of their role, participants drew and wrote keywords on sticky notes to describe the way they currently experience playgrounds. They shared their experiences within their groups and clustered the similarities between their roles.

Context explains where a playground is located and which audience it serves. In a residential neighborhood in Amsterdam, the ‘classic’ combination of small children and their parents who live nearby are at play on the weekend. Object comprises the physicality of the playground – what is its material substance (or lack thereof)? In Kyiv, an outdoor gym built during the Soviet era from scrap metal now welcomes exercisers of all ages. Scalability considers how a playground might expand in space, time and across different platforms. In Melbourne during the height of Pokémon Go’s popularity, a group of ‘trainers’ assembled in an alleyway to collectively capture a notoriously challenging Pokémon.

With these examples in mind, we asked the participants: how might we design a ‘playground’ that builds social cohesion with a focus on context, object and scalability? We provided each group with a blank ‘Tetris board’ with space for three ideas for each of the three themes: together they would negotiate which nine ideas would form the basis of their concept. The Tetris board included questions to help direct the negotiation, including: how does your concept address conditions like weather, noise, safety, public vs. private space? What materials does your concept use? Is your concept permanent? If not, how frequently does it occur: only at night, during the summer, on Saturdays?

Each group came up with highly creative concepts, from soft interactive malleable play furniture to digitally inclusive adventure land. Chosen by popular vote, the winning concept ‘Night and Day’ stressed the importance of children, teens and adults being able to access the playground for different activities at different times of day. Responsive lighting and ‘objects we can claim ownership of’ make the playground ‘different each time’. 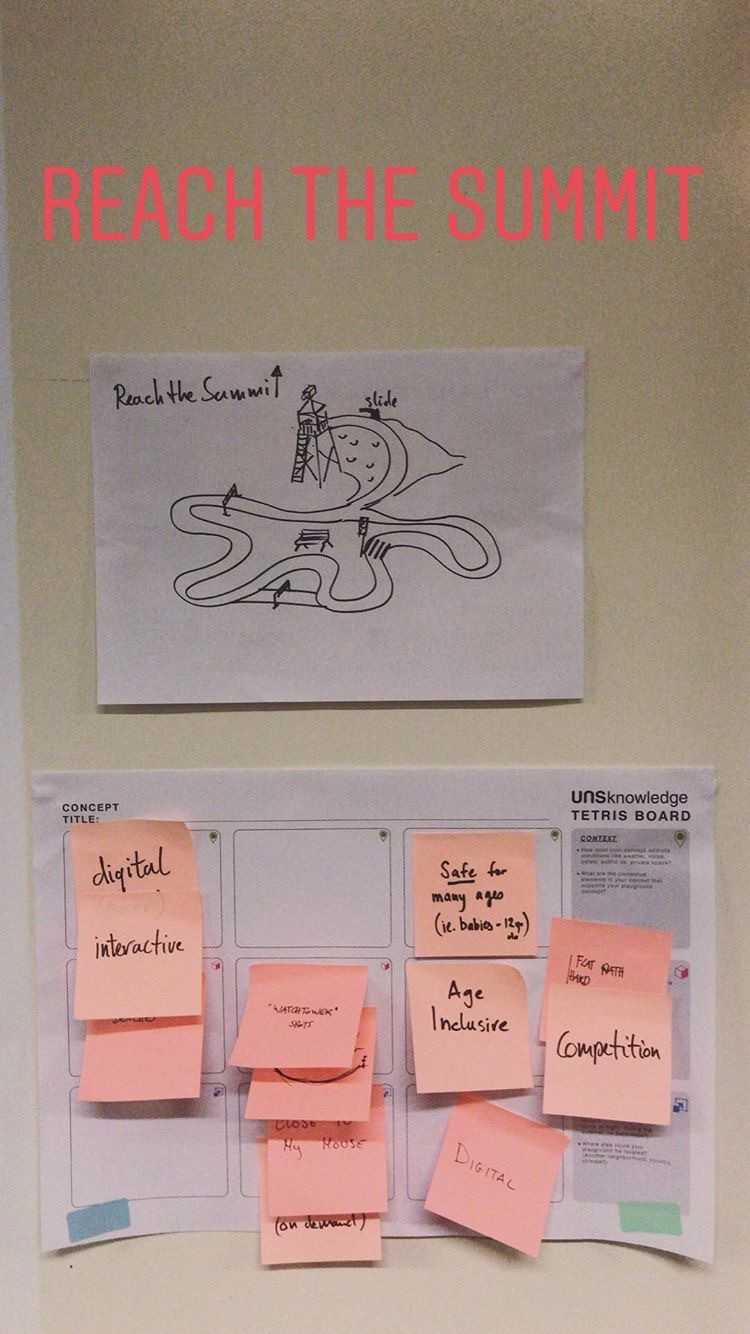 But the workshop didn’t end there! Our team brought it to our Instagram followers by posing several questions in Instagram stories. The responses were as varied as the respondents. Beyond choosing one of the six ‘roles’, respondents noted that although designing for any group is difficult,  the group which poses the biggest design challenge is people with disabilities, while the least challenging group is parents. Several respondents expressed their concern for the negative impact teens can have in these public spaces, while several others considered them the group with the most potential to design for. Extending the workshop to our Instagram followers provoked even more questions: how can we more meaningfully represent the wide variety of disability in design? How do climatic and cultural differences influence priorities for different groups?