The 400,000-square-metre Raffles City development in Hangzhou, China is UNStudio’s largest single construction to date. To design this structure, we needed to develop an integrated design solution that could incorporate our scale and sustainability goals through Asian fabrication methods, while overcoming programmatic complexity, social constraints and economic restrictions.

... designed from the inside out."

When starting a project as complex and as ambitious as Raffles City Hangzhou, it was important to establish our human and societal ambitions. Much more than an undulating shape, the parameters of this building were rooted in a human and programmatic level first and foremost, supported strategically by parametric design components. The human elements ultimately make or break the success of the building’s function and occupancy, and as such, each design element comes with a considered thought process, strategy and intention. In this way, Raffles City Hangzhou was designed from the inside out: accessibility, programmatic layering and interweaving, and interaction with the urban context determined the external geometry.

making it appear as though the building is floating above the landscape."

Each tower has three main facade types: The urban facing facade, the tail facade and the landscape facade. The urban and tail facades lead towards the interior podium courtyards. The link between these two facades is the landscape facade, which begins at landscape level and elevates into four themed courtyards that flank the two towers. Apart from these three facades, a double height glazed podium facade wraps around the bottom of the building, providing access points at different scales and making it appear as though the building is floating above the landscape.

To design these facades, a dedicated team was assigned to each facade, equipped with its own strategy and chain of tools. Along the geometry development process, we worked intensely with a lot of internal and external collaborative expertise from programming and scripting specialists. 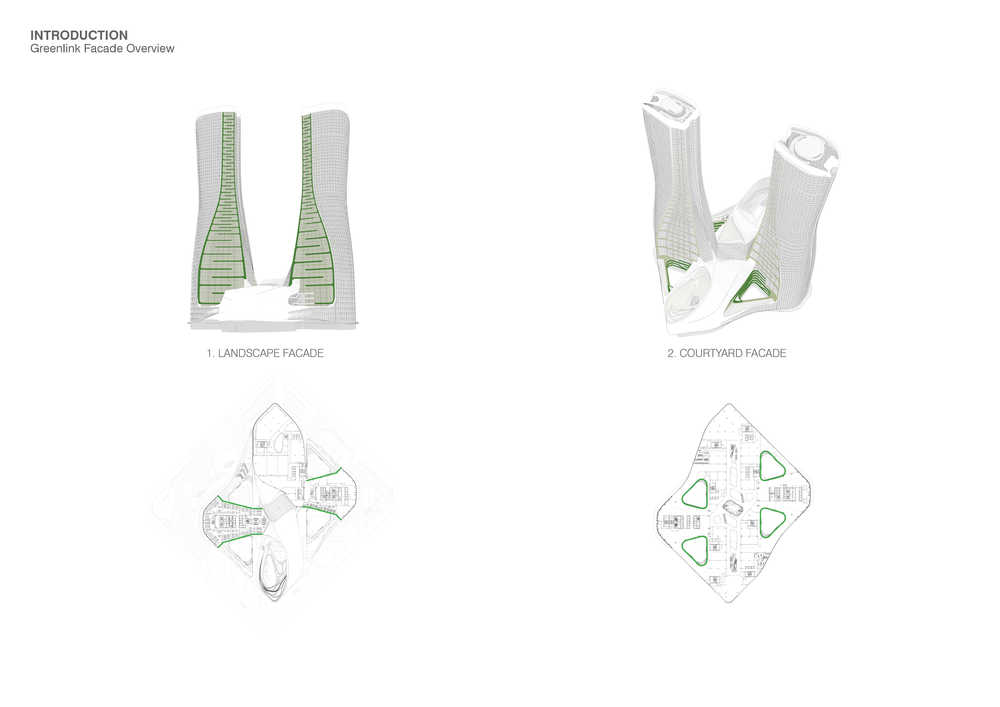 "The facade fins…using half the material while achieving the same effect."

As there are many different facade elements, we needed to be wary of a potentially fragmented appearance. To overcome this, we developed facade component motifs, such as a continuous framework of horizontal and vertical lines that enclose metallic fins and tiles. These components transform, grow and shrink in a controlled way across the envelope of the building, allowing each facade to serve particular functions. By analyzing the tower facade for exposure to radiation and heat, we were able to prioritize parts of the building that needed more shading in relation to its orientation. The facade fins, designed in a triangulated folding pattern, became a three dimensional object from one individual sheet of metal. An in-depth analysis of the shading depth, orientation of rotation of those fin, resulted in a reduction of required metal surfaces from eight square meters to four, using half the material while achieving the same effect. To accommodate different parameters, we used several different fin sizes. Some fins were wider on the bottom, or had a narrower surface. The fins are paired with a unitized curtain wall system across the urban facade to give the building its characteristic and performative texture. 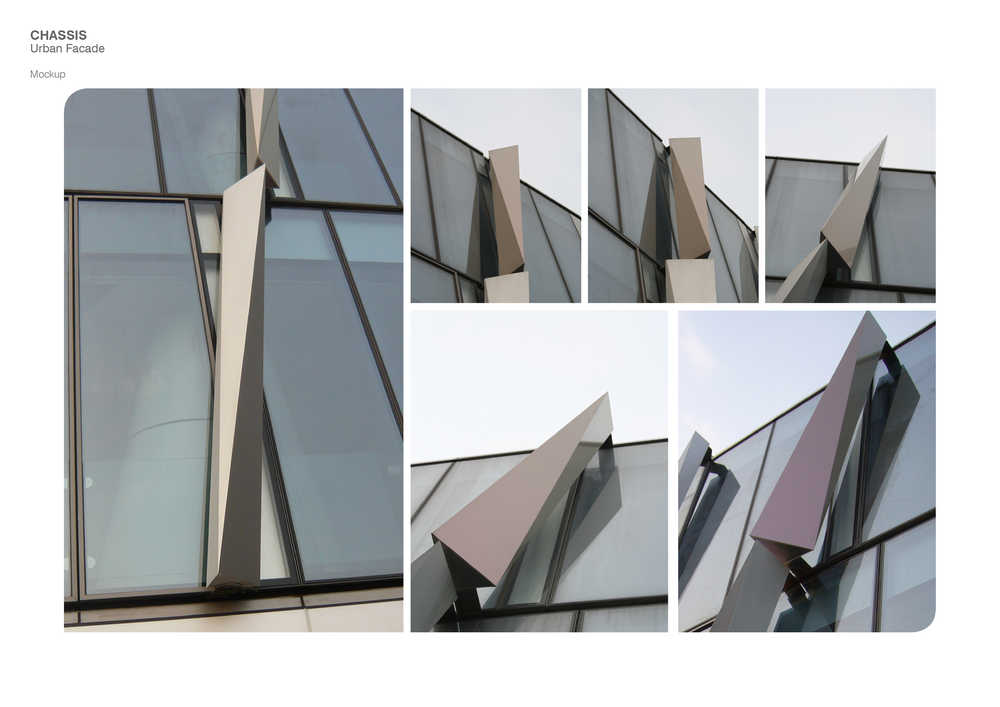 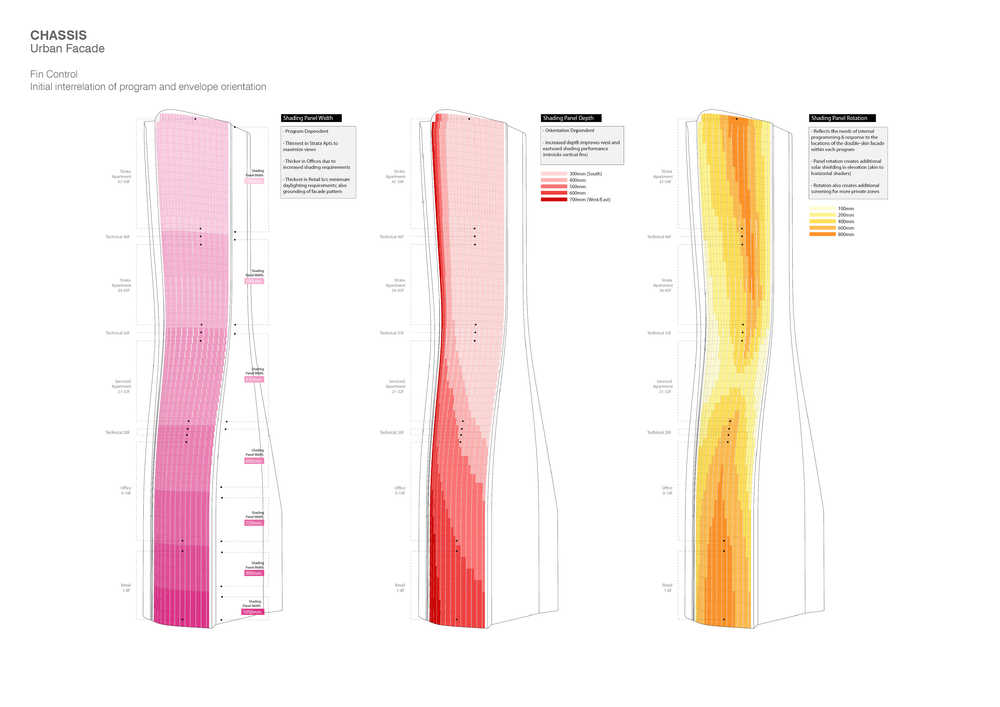 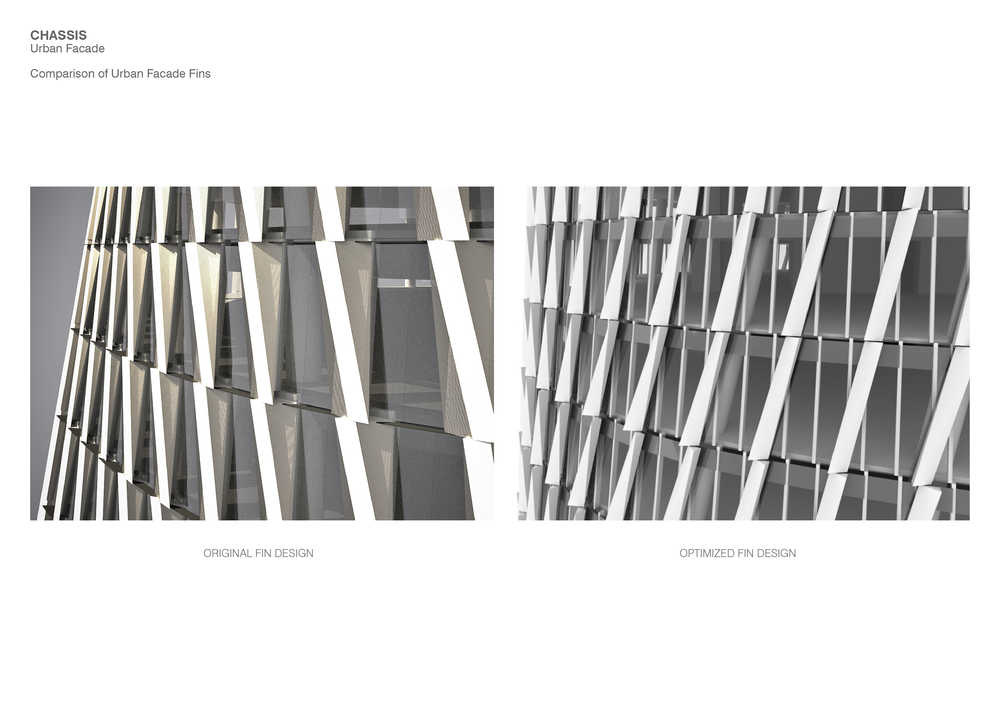 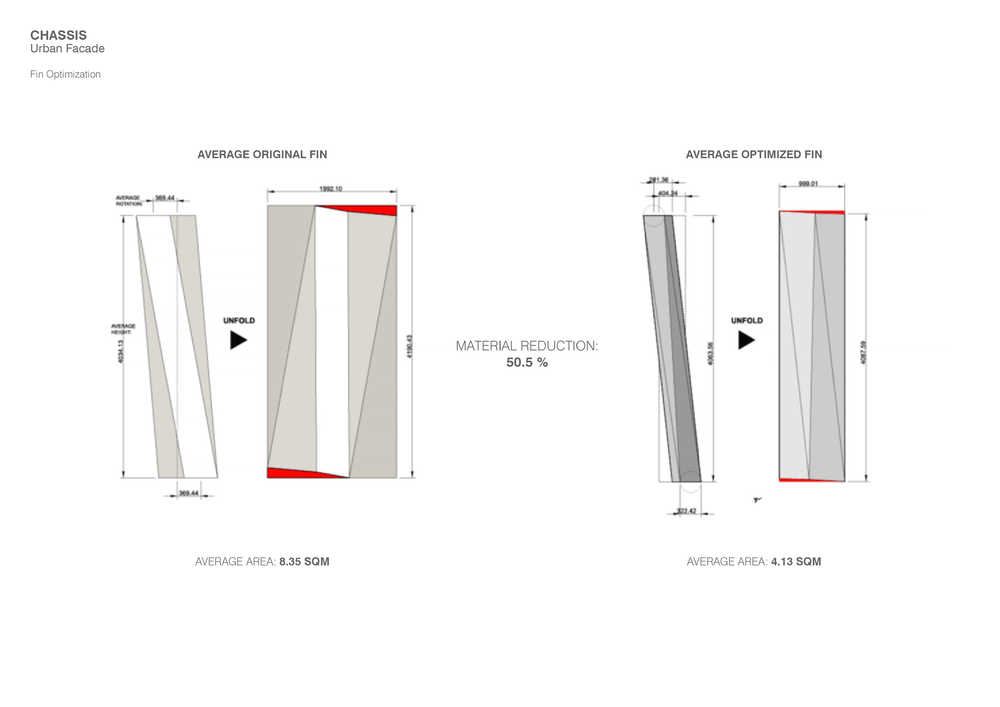 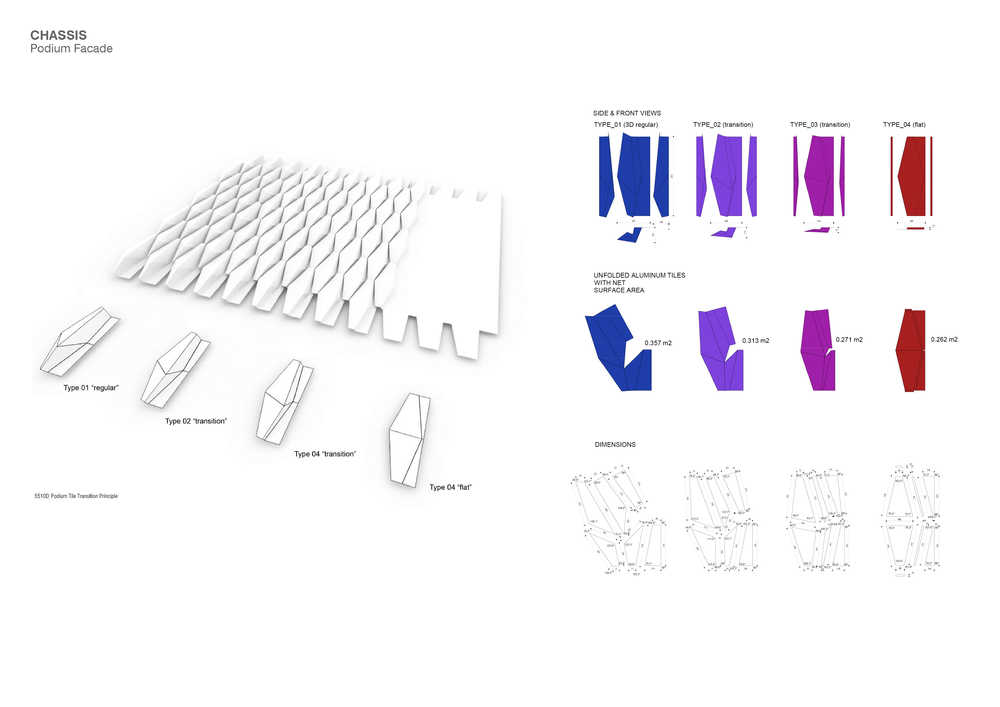 "These parameters self-optimise during automated instantiation. This simplifies fabrication demands and reduces cost."

To ensure that these materials accommodated to different parameters, we worked with parametric systems and tools like Grasshopper®, Rhinoscript and the Gehry Technologies Digital Project, which became deeply rooted in the DNA of the project. The result is an embedded series of streamlined parametric tools integrating increasingly numerous parameters into a focused, synthesised design end-product. These parameters self-optimise during automated instantiation, which simplifies fabrication demands and reduces cost. Component-driven curtain-wall panel optimisation in Digital Project analysed sustainability, fabrication and installation parameters such as vertical tilt, horizontal angling, glass panel geometry and type efficiency.

Grasshopper and Rhinoscript served as both form generators and envelope optimisers, incorporating floor areas and heights to create driver geometry and systemised data sheets. Together, the geometry and data sheets acted as the skeletal system of the building information model (BIM). By imputing the building’s parameters into developed scripted routines, we found the best unit-to-unit relation and sizing for particular surfaces. 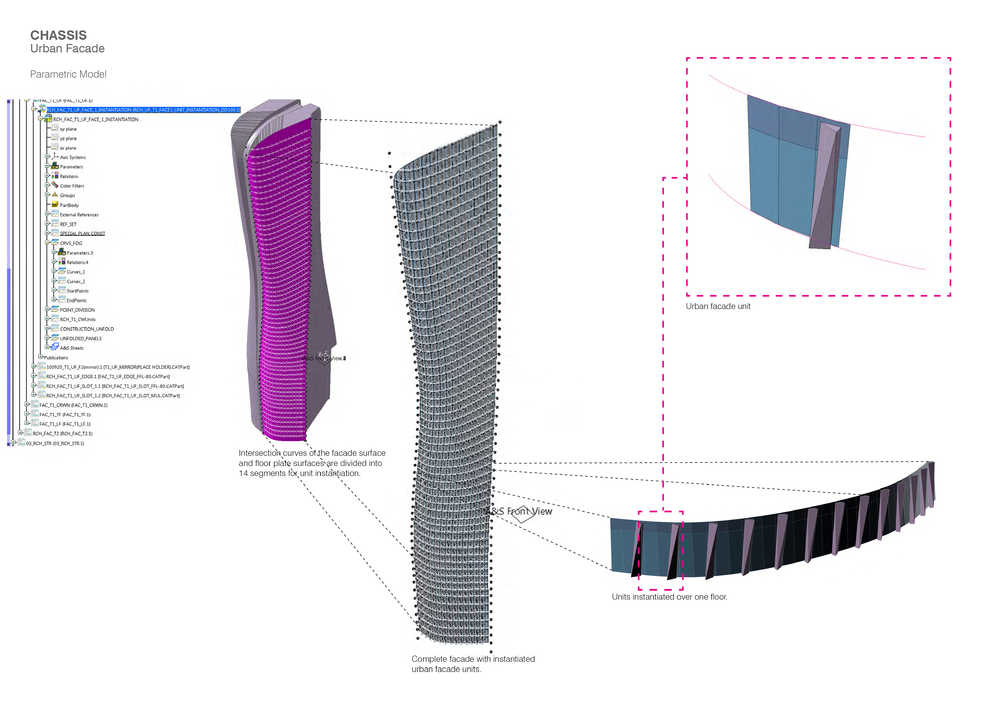 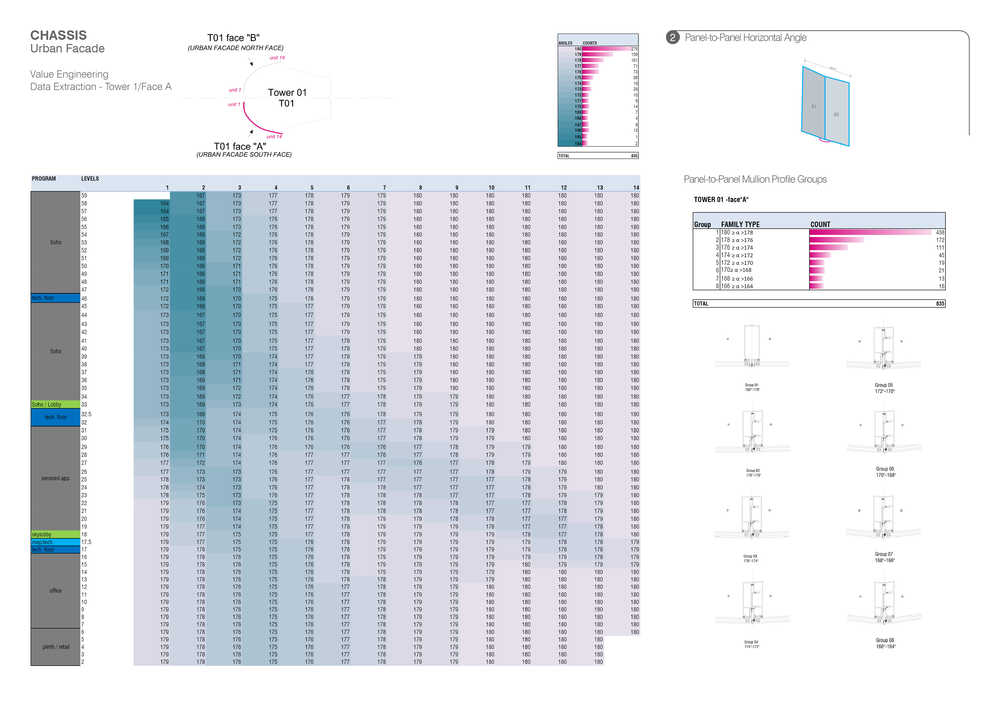 "By customizing and merging the functions of these tools, we allowed ourselves the space to go much deeper, and focus on key areas."

To develop the structure within these tools, the facade was broken down into facets, units and panels, with each unit being treated as one pixel which has its own individual characteristics and relationships with its neighbors.

All of these measurements were systematically categorized, organized and described into a geometrical framework. In a nutshell this allowed us to see exactly how many angles we needed, what lengths we would require, and where specific elements occur and were able to understand our materials to prepare documentation for the construction process. For example, along the double curved surface, we could see that we would only need four different glass widths, several lengths relating to the floor-to-floor height and only eight specific angles to establish vertical and horizontal tilting of the facade units.

By customizing and merging the functions of these tools, we allowed ourselves the space to go much deeper, and focus on key areas. These integrated, nonlinear workflows processed and assimilated a greater amount of parameters, which achieved a simpler, efficient and adaptive design solution. This generated the building’s signature envelopes and arranged the component families that define the facade’s systems that follow the twisting geometry of the building, and help overcome environmental and economic constraints.

As technology develops to become even more powerful, form-making and form-controlling are no longer its most useful features alone. Whether through customized software or a single piece of code, computation’s potential lies in its flexibility to translate and communicate design data across multiple disciplines, and to visualize that data. This becomes particularly useful when maneuvering or manipulating features, making specific knowledge available when needed.