The Origin of the Twist: Theatre Graz

Built around a spiraling structural element masked with a staircase, The MUMUTH is a faculty building that houses a concert hall and theatre, a sound research laboratory, and supporting facilities for the University of Music and Performing Arts in Graz, Austria. The twisting spatial feature acts as the centrepiece for The MUMUTH in terms of orientation, concept and structure.

"A room in which music is played is not just a roof over one’s head to be chosen temporarily. This room enables music and also helps to create it."

Otto Kolleritsch, Rector emeritus of the University of Music and Performing Arts (June 2001)

When we started the design for the MUMUTH, a key consideration was that every year, the students of the University of Music and Performing Arts would perform in more than 800 events in this building, ranging from in-class presentations to drama performances, jazz to chamber music, orchestra concerts and complete operas. With this number in mind, our aim was to design a building that could be as much about music as a building can be. The twist that we designed for MUMUTH bears the most direct relationship to music, acting as a constructive focal point that conducts the structure. It also acts as the organisational element of the building, around which everything revolves. In much the same way as Serialism functions in contemporary music, the continuous line absorbs and regulates intervals and interruptions, changes of direction and leaps of scale without losing its continuity.

The question for us became: How can a building be structured to combine within one, rigorous gesture a strict, unit-based volume in the form of a black box of the theatre, and a series of flowing, movement-based public spaces? For us the answer was in the extreme fluidity and continuity of the twist, counteracting the rigid box volume. It holds the central concrete staircase, but also stretches and folds to form and articulate interior spaces. Connecting the entrance to the auditorium and to the music rooms above, all three levels on one side of the building are welded together ‘with a twist’. This principle of a spiral that divides itself into a number of interconnected smaller spirals that take on a vertical and diagonal direction became an important design model for us which we called the blob-to-box model. Public spaces occupy the more dynamic side of the building (the blob) while education areas are organized within the rectangular structure (box) on the other side. The twist joins the blob and the box together.

The twist is in fact a massive concrete construction, which was one of the most challenging we ever created. The dimensions of this particular twist necessitated great precision in terms of design and construction. The design and form finding process started with very simple hand drawn models of the structure in elevation. The engineers noticed that the entire 'Twist'-structure comprises a lever arm with the potential to carry the weight of the foyer slabs by just cantilevering from the theatre-box. Intrigued with this idea we adjusted the concept of our initial Twist-geometry drastically to make it work structurally. The structural system is called the 'vierendeel beam structure' named after the inventor Arthur Vierendeel.

The final twisting geometry was developed in close cooperation with engineers. Developed over time with more and more accurate structural models, the twist’s geometry was improved up to the final layout: In its final design, the Twist was created as a three layered steel composite structure. The inner layer consists of a truss of steel hollow sections acting compositely together with the two outer reinforced concrete shells. The main load path runs along the inner edge of the Twist. The FE-analysis with a three-dimensional stick model took into account the three dimensional load bearing behaviors. The huge compression forces along the inner edge of the Twist verified the results of the strut-and-tie model. The final geometry of the Twist was assessed using an FE analysis with shell elements. 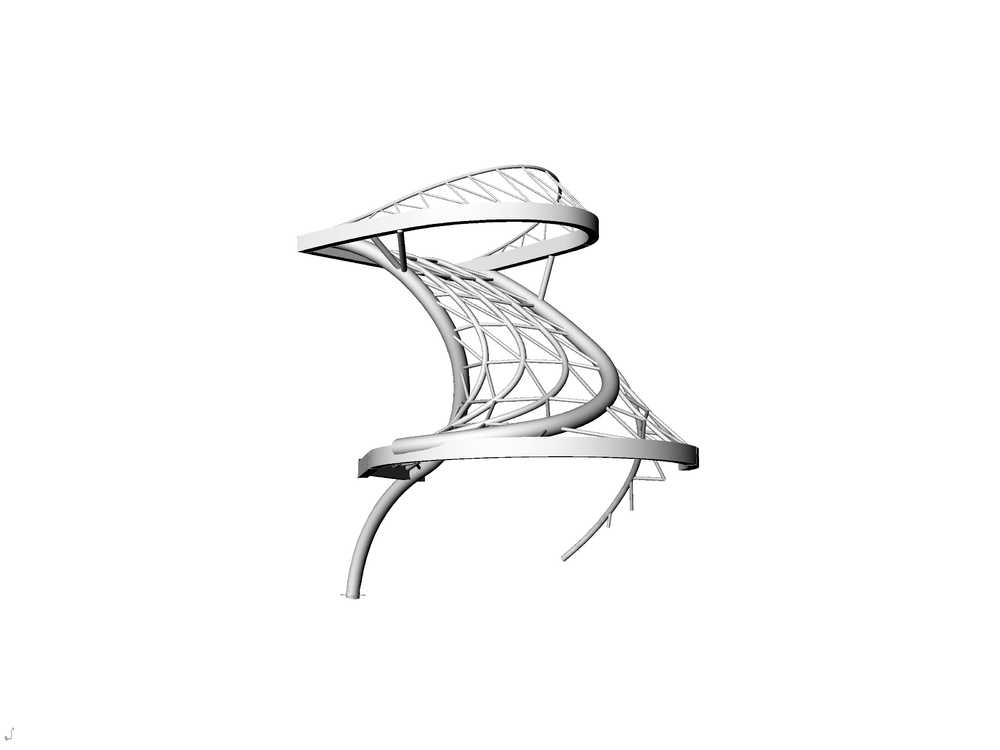 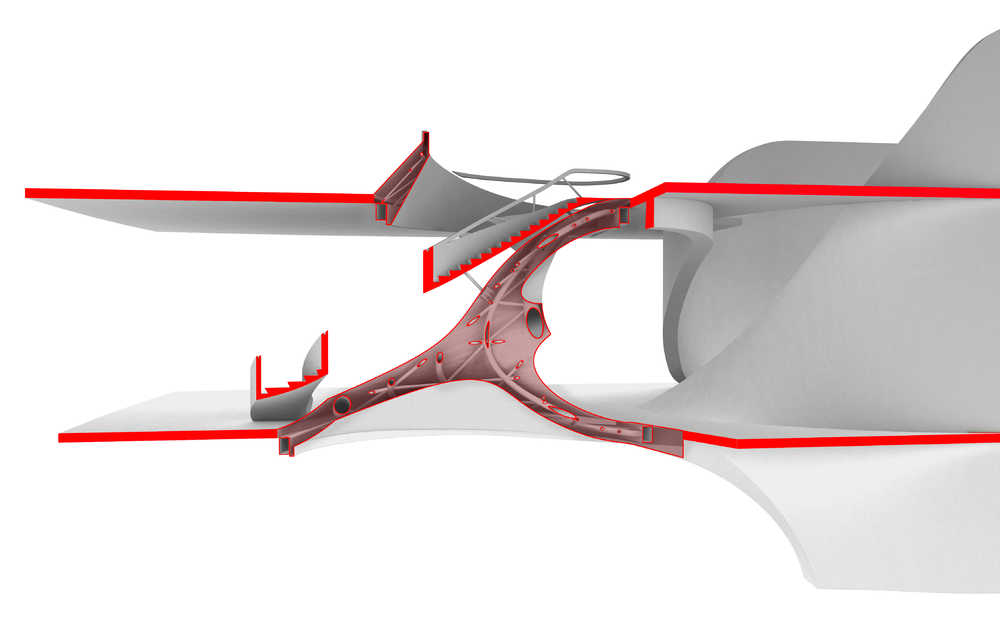 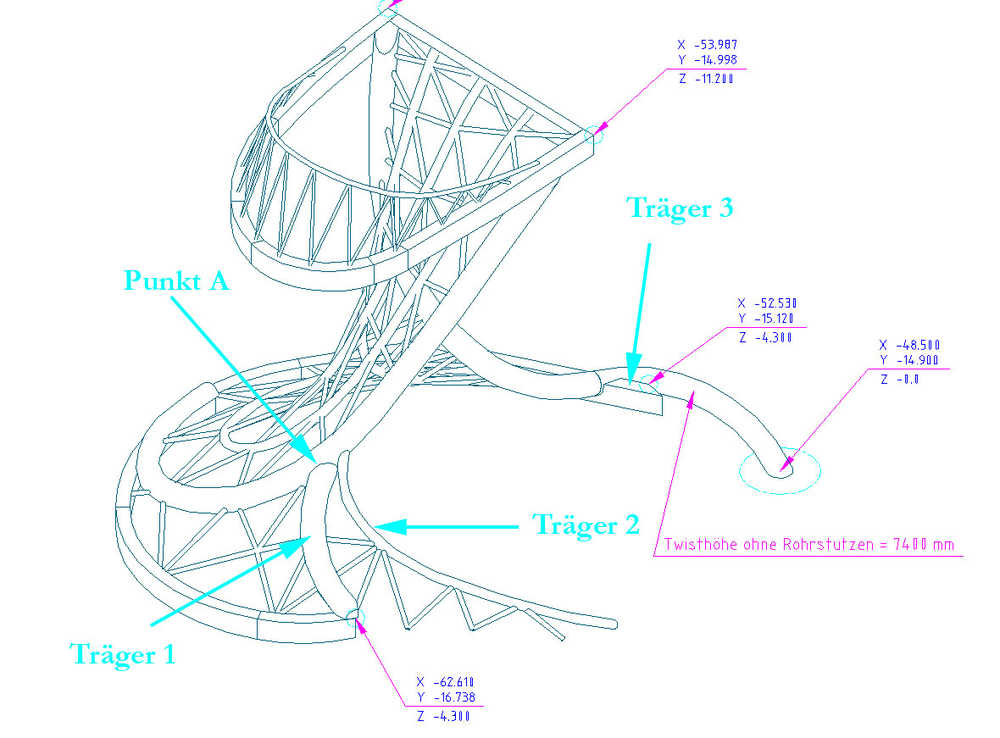 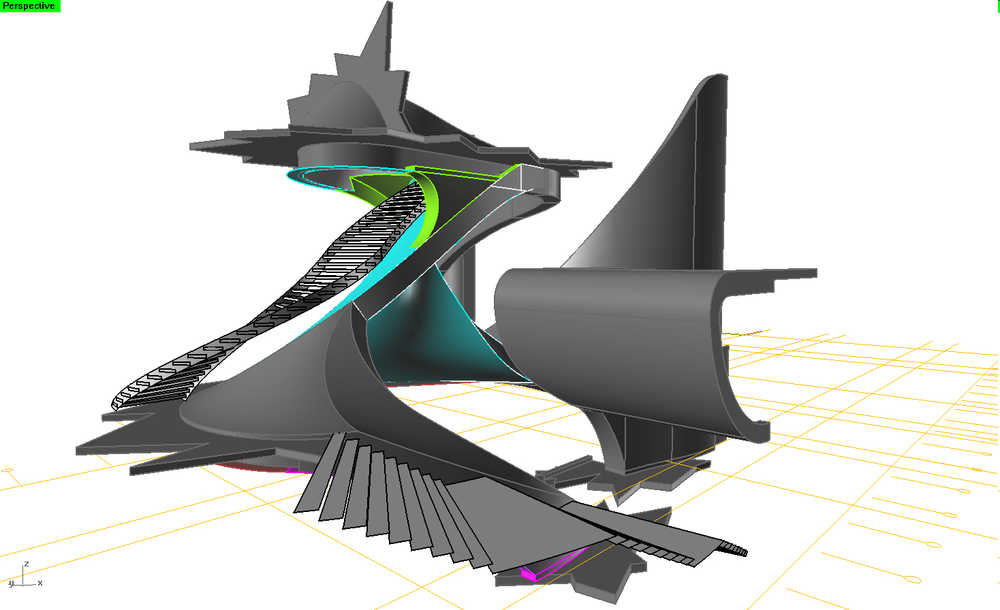 Due to its size and complexity, the Twist has been pre-assembled in the factory. After that, composite structures were cut into transportable pieces and delivered to the building site. The steel structure was delivered in large sections, and the form work was also delivered from Germany in large pieces.

After the assembly of the steel, reinforcement was arranged in combination with the filling material and framework. The dimensions of this particular twist necessitated far greater precision and the use of self-compacting concrete which was pumped up from below instead of poured down from above as is the usual method. 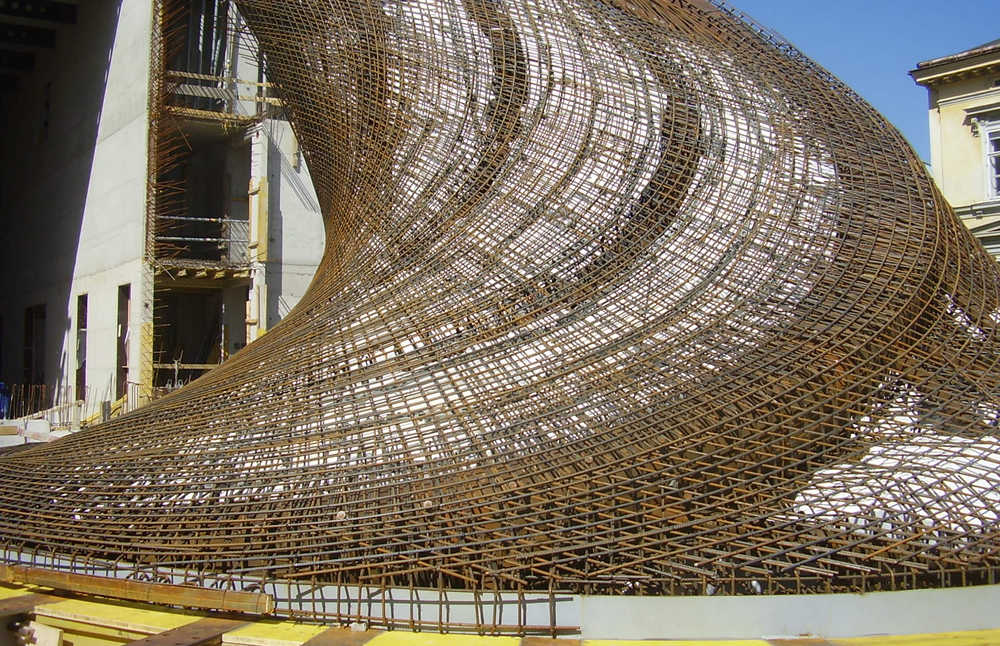 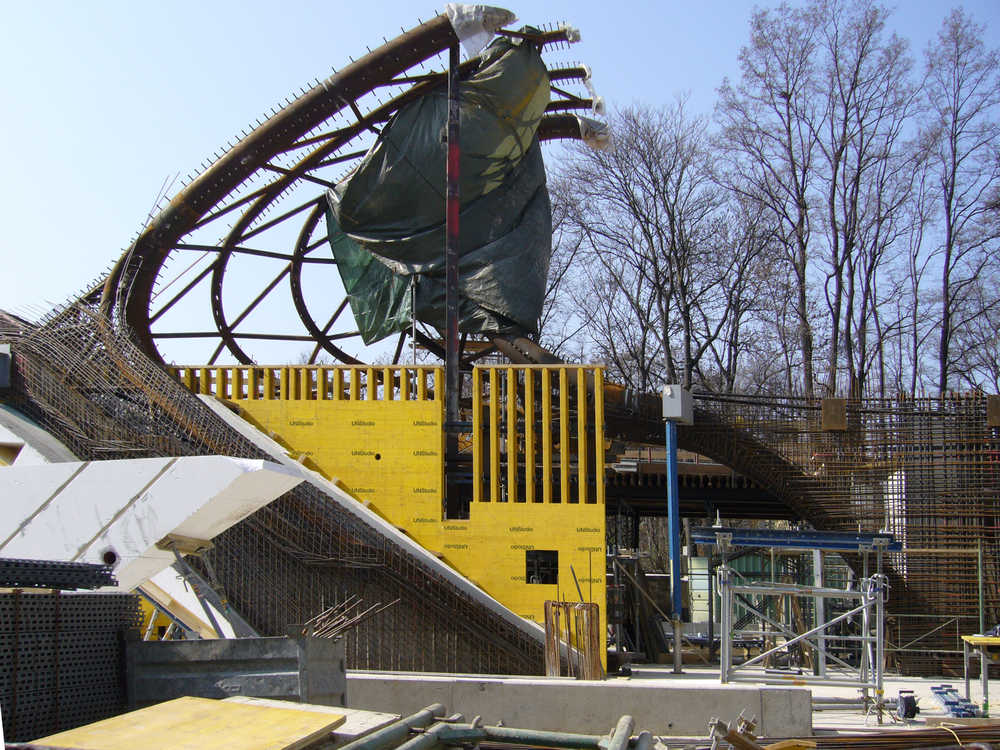 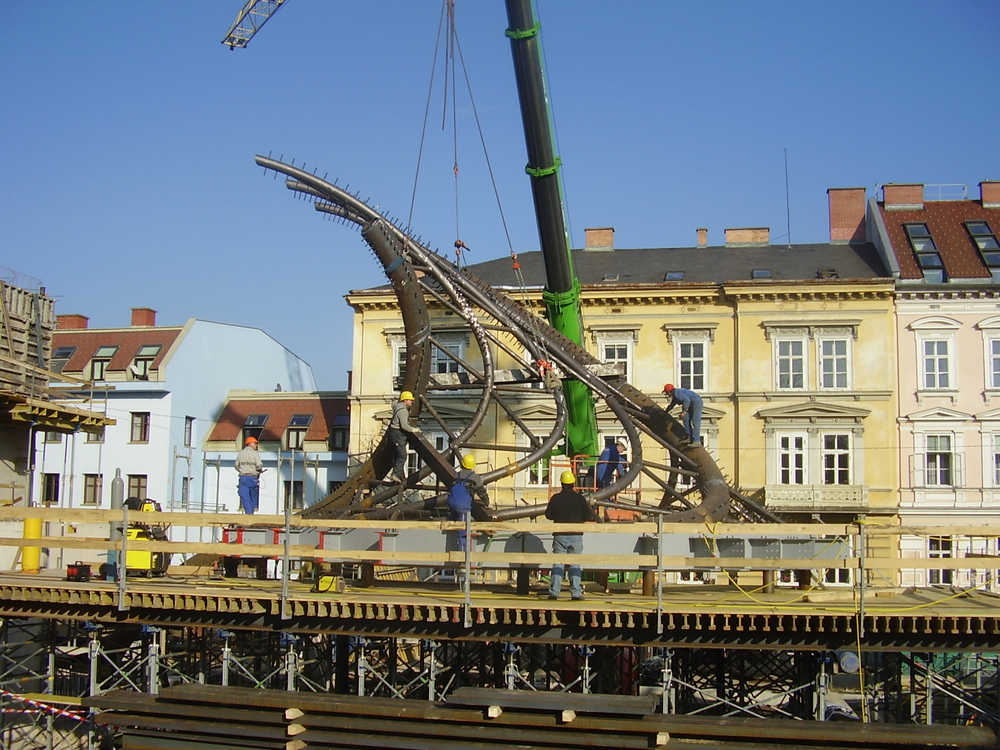 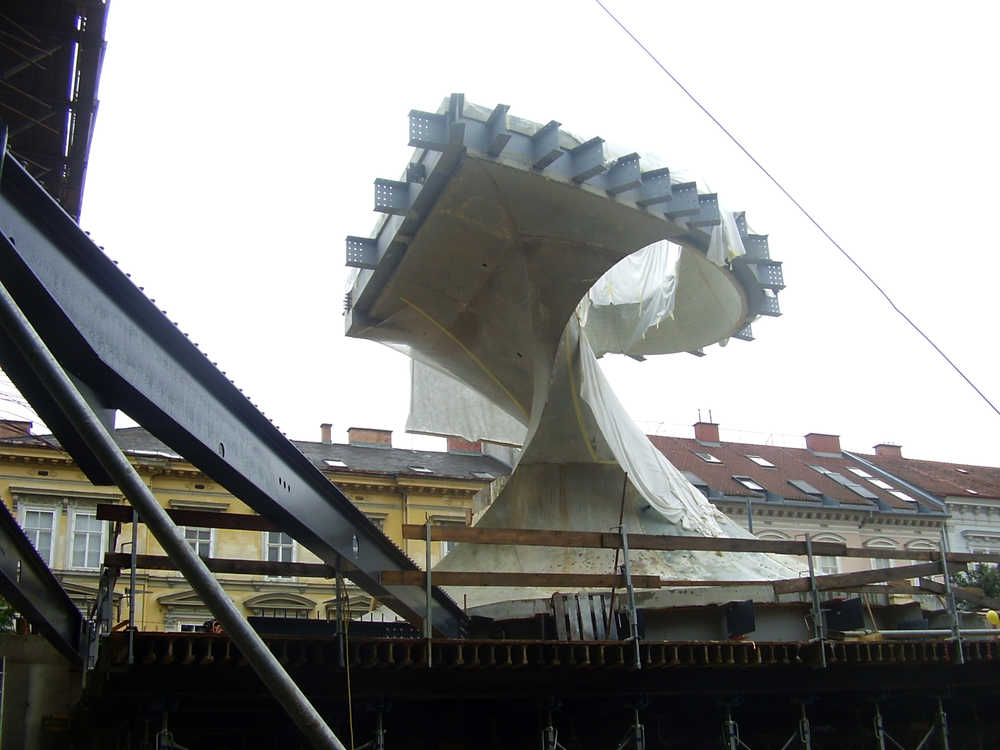 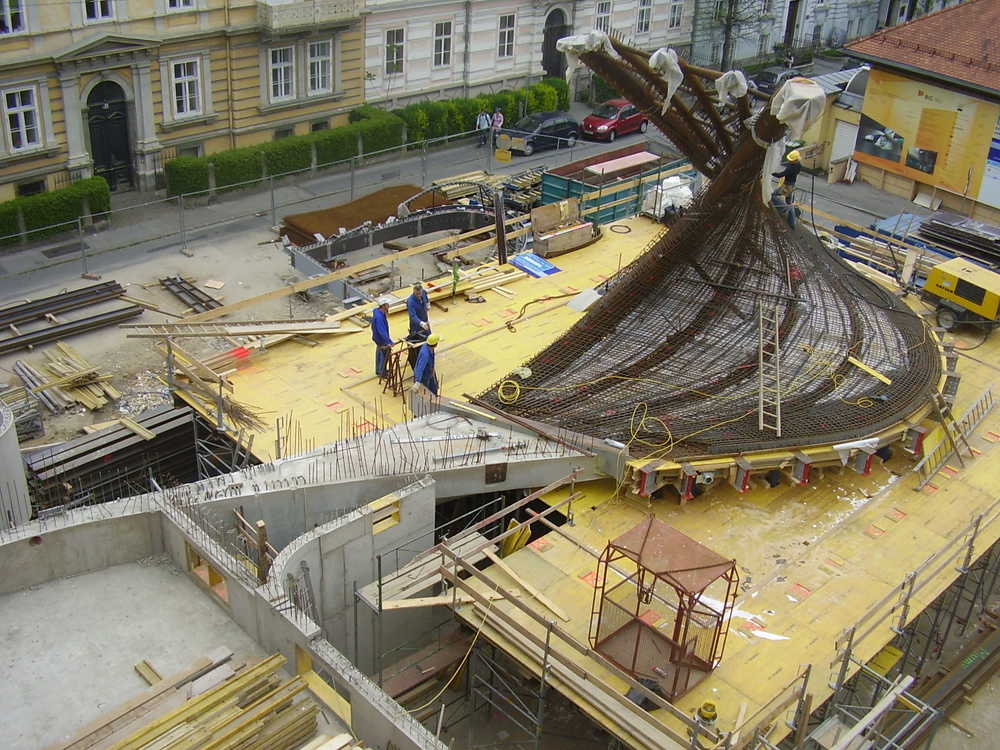 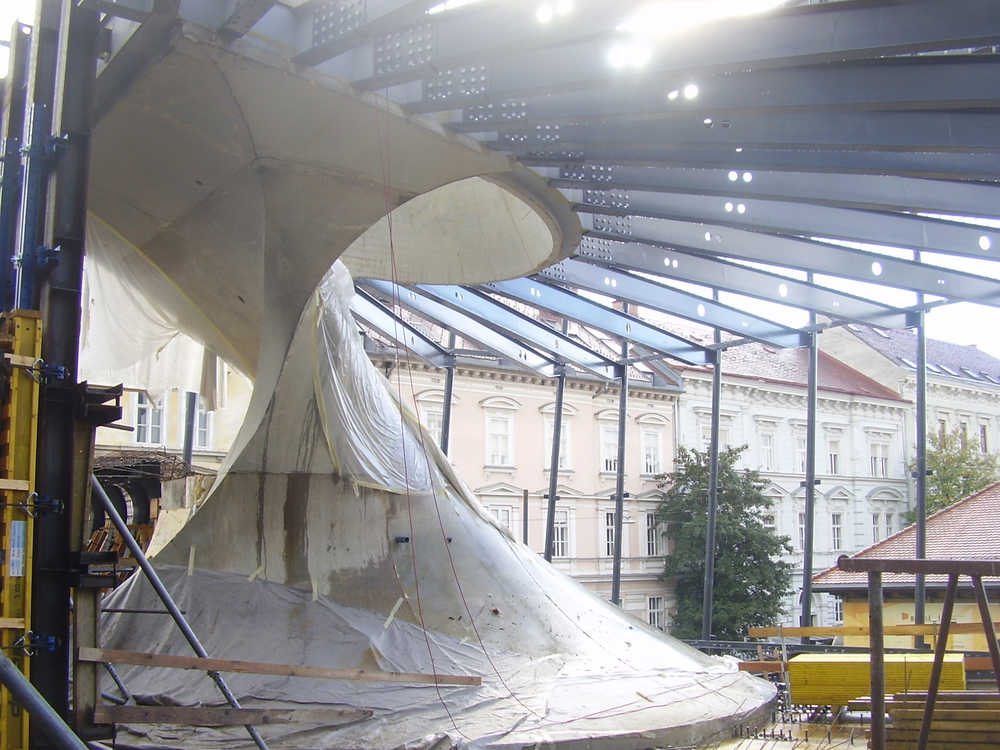 This organisational principle creates, a free, fluent internal spatial arrangement, efficiently connecting spaces to each other. The theatre has a public character which is dynamic and which facilitates groups of people moving through it during events, as well as a calm, quiet, intense, but also very flexible and rational character which is related to the specific prescriptions of the auditorium and the rehearsal studios.

“The relationship between music and architecture is a classical one. Too classical for our times, may be the thought of many contemporary architects. But that is not our view; UNStudio likes classical with a twist…”